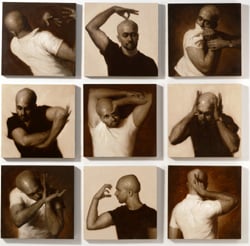 The focus of this display is the recently completed portrait of the dancer and choreographer Akram Khan by the artist Darvish Fakhr. Consisting of nine panels, this unusual portrait shows Khan performing the nine rasa, or emotions, which are expressed by a dancer through movement and expression, and are the basis of classical Indian dance. In this portrait, Khan has interpreted each rasa in a personal and deliberately ambiguous way, reflecting his innovative approach to contemporary and traditional Asian dance. In order to capture his movements on canvas, Fakhr closely observed Khan at rehearsal and in performance.

This commission is one of a series of portraits of celebrating young figures in the arts made possible by the Jerwood Charitable Foundation, and this display includes another commission from this series, Phil Hale's portrait of the composer, conductor and pianist Thomas Ades. Other performers in this display include the dancers Anthony Dowell and Adam Cooper, both of whom became Principle Dancers at the Royal Ballet, and the actors Fiona Shaw, painted by Victoria Russell and John Hurt by Stuart Pearson Wright. These works demonstrates the different approaches of artists when representing performers.