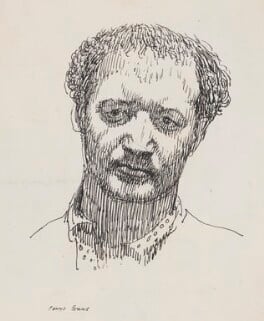 Powys Evans (1899-1981), better known as 'Quiz', was one of the most successful illustrators and caricaturists of his generation in the 1920s. His distinctive pen and ink portrait drawings and stylized and occasionally vicious caricatures of well-known personalities of the day appeared regularly in popular reviews of the arts, literature and current affairs. They were exhibited at the Leicester and Goupil Galleries and were published in Eighty Eight Cartoons (1926) and Fifty Heads (1928). However, while still only in his mid-thirties, and for reasons that remain unexplained, he turned his back on success and withdrew from London. He retired to Dolgellau in Gwynedd, north Wales, where he died in 1981.

Son of a county judge from Cardiff, Evans was born in London in 1899. He was taught to draw by artists Spencer Gore, Walter Sickert and Sylvia Gosse and studied under Henry Tonks at the Slade School of Art. During the last years of the First World War he served with the Welsh Guards and on returning to London in the early 1920s he settled on a career as an illustrator. He drew for Tatler, but, in his own words, was "thought to be too vulgar".

In 1922 he was employed by the London Mercury, a monthly literary review, initially to provide two portraits for each issue. Also in that year, he achieved immediate acclaim as a caricaturist with the publication of a set of cartoons based on Claude Lovat Fraser's designs for the long-running production of The Beggar's Opera at the Lyric Hammersmith. Following this success, he was appointed house caricaturist for the weekly Saturday Review of Politics, Literature, Science and Art. Max Beerbohn admired his sense of style and in 1924 proclaimed him as his heir.

The National Portrait Gallery holds Evans's sketchbooks from the 1920s, which contain countless quick-fire pencil drawings of his subjects, and a substantial collection of finished pen and ink portraits and cartoons. Most recently, in 2006, the Gallery purchased a group of nine caricatures that were produced for the Saturday Review.  This display includes examples of Evans's original sketches from life as well as finished drawings that appeared under his own name in the London Mercury and cartoons signed by his alter ego Quiz that were published in the Saturday Review.