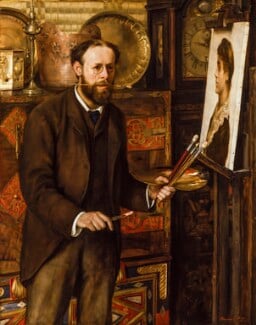 Supported by The Art Fund

Marion Collier's intriguing portrait of her artist husband, John Collier, shows him, brush between his teeth, in the act of painting a portrait of her. The portrait of Marion on John's easel is probably based on the one that also hangs in this display, although the image has been reversed and the details of her dress are different. This is the first time the two paintings have been exhibited together.

Marion's portrait of John was a great talking point when it was first exhibited as 'An Artist at Work' at London's fashionable Grosvenor Gallery in the summer of 1883. Aside from the unusual nature of the work, Marion and John must themselves have seemed a fascinating and attractive couple. Both were from interesting backgrounds and part of a distinctive social and intellectual milieu. Up and coming young artists, they both had other works in that year's Grosvenor exhibition. The richly detailed background of the portrait itself evokes their domestic ambience, showing the studio they shared at their home in Chelsea.

Tragically, Marion died just five years later. John loaned her portrait of him to the Victorian Era Exhibition of 1897 but, since then, it has not been seen in public until now.