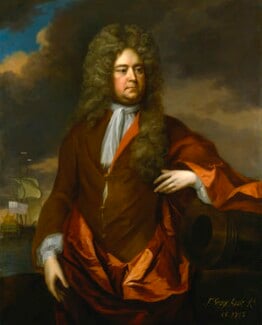 Admiral Sir George Rooke was the pre-eminent British seaman of his day. One hundred years before the name of Nelson became synonymous with naval excellence, Rooke was the unequalled scourge of enemy fleets. His victories, including the destruction of the French fleet at La Hogue, 1692, his capture of the Spanish silver fleet at Vigo, 1702, and above all his capture of Gibraltar, 1704, excited both admiration and bitter rivalry among his peers.

The painting is one of finest works by Michael Dahl, the London-based Swedish portrait painter and personal friend of the sitter. Rooke's imposing figure set before a threatening sky makes this is an exceptional example of Baroque portraiture. It was acquired by the Gallery from the Knatchbull collection.