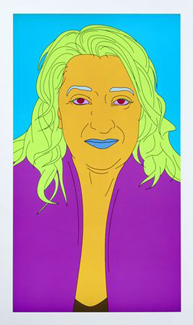 Iraqi born and London-based architect. The first woman to win the Pritzker Prize for Architecture in its twenty-six year history, Hadid's works are characterised by new spatial concepts and bold, visionary forms. Her seminal buildings include the Rosenthal Centre for Contemporary Art, Cincinnati, described by the New York Times as 'the most important new building in America since the Cold War', while the BMW Central Building in Leipzig, Pheano Science Centre in Wolfsburg and Nordpark Railway stations in Innsbruck have all been nominated for the RIBA Stirling Prize. Works in progress include the London 2012 Olympic Aquatics Centre.

Craig-Martin is one of the key figures in the first generation of British conceptual artists and, as Professor of Fine Art at Goldsmith's College in London in the 1990s, he was a significant influence on a younger generation of artists including Julian Opie, Gary Hume, and Damien Hirst. This commission marks a new departure into the realm of portraiture for Craig-Martin whose subjects are generally everyday objects and their relationship with the spaces they inhabit. Although the linear portrait is fixed, the saturated colour palette is controlled by computer software that makes constantly randomised choices. The work slowly changes over time in infinite combinations. Hadid's projects build on over thirty years of experimentation with cutting-edge technologies, and so it seems appropriate that her own likeness should be realised in the form of a computer portrait.

Commissioned by the Trustees and funded by JPMorgan through the Fund for New Commissions.