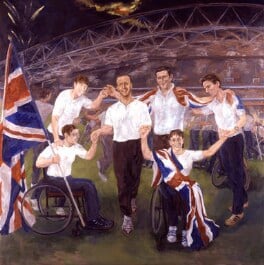 In August 2008, London becomes the official host of the 2012 Olympic Games. This display brings together a selection of great British sportsmen and women of recent years, many of whom have won medals at previous Olympics and Paralympics and some are preparing for the Beijing Games this summer.

This display includes three portraits created in 'time-based media' ­ meaning works of art that depend on technology and the passing of time. These portraits are Duncan Goodhew by Marty St. James and Anne Wilson, David by Sam Taylor-Wood and Sustained Endeavour by Dryden Goodwin.

Duncan Goodhew is the earliest work in this display that uses film. Created for the Gallery in 1991, it showcases the dynamic movement of the swimmer as he dives into the water. In contrast, Taylor-Wood's film David is an intensely intimate portrait of the footballer David Beckham, filmed as he slept after a training session. The artist wanted to show a different side to Beckham, away from the pitch and his glamorous public-image.

The artist Dryden Goodwin animated twenty-five drawings on a continuous loop for Sustained Endeavour,a portrait of the rower and Britain's greatest Olympian, Sir Steve Redgrave. Redgrave is not depicted rowing, but the flickering nature of the film suggests a shimmering reflection in water. This group provides a fascinating insight into the way in which contemporary artists working in new media have approached the representation of sportspeople.