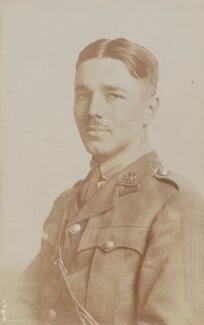 This display marks the ninetieth anniversary of Armistice Day, the symbolic end of the First World War on 11 November 1918. The conflict was dominated by trench warfare and the use of new military technology, including machine guns, tanks and aeroplanes. It is estimated that nine million soldiers died and a further eighteen million were wounded.

Many soldiers and civilians, men and women, wrote and published verse between 1914 and 1918. The term 'war poet' is most commonly associated with the soldier-poets, many of whom died in combat. Their work is both poetry and testimony, providing a voice for those who fought in the trenches on the Western Front.

The small selection of war poets represented in this display shared the experience of war, but were separated by rank, age and class. Rupert Brooke, who did not see active service, wrote of patriotism and hope, while others, including Wilfred Owen and Isaac Rosenberg, were appalled by the reality of the trenches and the violence they witnessed.

Other poets of the First World War can be found on the Gallery's Portrait Explorer in the IT Gallery.