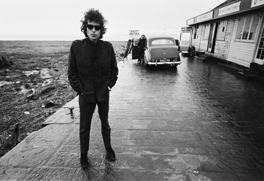 This display of fourteen photographs of Bob Dylan celebrates the publication of the paperback edition of Barry Feinstein’s new book Real Moments.

In an interview in 2008, Feinstein recalled, ‘I was in a unique position, given complete access and trust during a very special period. I saw Bob perform hundreds of times, travelled with him, often spent 24 hours a day with him…I liked his work, Bob liked mine. He knew I would make him look interesting. He was comfortable with me and my cameras.'

Feinstein, who had made a reputation as a photographer at Columbia Pictures in Hollywood during the 1950s, took the iconic portrait of Dylan that appeared on the sleeve of his 1964 album The Times They are A-Changin’. He was subsequently invited to be Dylan’s official photographer on his first electric European tour, which followed the 1965 acoustic tour documented in D.A. Pennebaker’s Don’t Look Back.

In spring of 1966 Dylan toured across Australia and Europe, and during May 1966 he appeared in venues across the UK. At each concert Dylan performed solo on acoustic guitar and harmonica followed by an electric set, backed by The Hawks, later known as The Band. Spectators around the country protested at Dylan going electric and at the Manchester Free Trade Hall a member of the audience shouted: ‘Judas!’ to which Dylan responded, ‘I don’t believe you ... You’re a liar!’ However by the end of each show, according to Feinstein, ‘the crowd loved it’.

After the tour Dylan went back to the United States to get ready for another series of concerts scheduled for mid summer. At the end of July he had his infamous motorcycle accident which allowed him to take a long rest; Dylan did not tour again for eight years.

The National Portrait Gallery would like to thank Dave Brolan, editor of Real Moments, for helping curate this display and Guy White at Snap Galleries Ltd for his assistance.