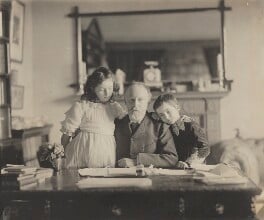 Eveleen Myers was the daughter of Charles Tennant and Gertrude Collier. Eveleen and her sister Dorothy, who later married the explorer Henry Morton Stanley, were painted by George Frederic Watts and John Everett Millais. Both sisters played an active role in the salon their mother established in the early 1870s at which they entertained political figures, artists and intellectuals of the day.

In 1880 Eveleen Tennant and F.W.H. Myers married. Disillusioned by Christian religious beliefs, F.W.H. Myers had become interested in spiritualism and was a co-founder of the Society for Psychical Research in 1882 that investigated paranormal phenomena using scientific principles. He travelled extensively in the United Kingdom, Europe and the United States and his investigations were summarised in the book Human Personality and Its Survival of Bodily Death although not published until after his death.

Inspired by a childhood visit to the studio of Julia Margaret Cameron, Eveleen took up photography in 1888, first to record her children, but later creating portraits of her contemporaries such as Robert Browning and William Ewart Gladstone. She set up her studio in the family home, Leckhampton House, Cambridge, with her own developing and printing facilities.

During the course of this display two new publications will be available from the bookshop: Immortal Longings: F.W.H. Myers and the Victorian Search for Life After Death by Trevor Hamilton (June 2009) and The Magnificent Mrs Tennant by David Waller (May 2009).