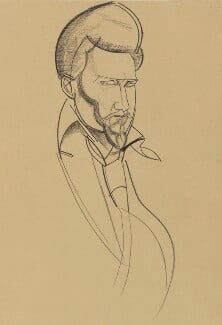 During the last ten years the National Portrait Gallery has acquired a number of remarkable 20th century portraits on paper.  Life lines features a selection of these recent acquisitions. Through the lives it evokes, the display provides a concise survey of portrait drawing in the last century.

The display commences with Dora Carrington’s striking early self-portrait of 1910.  Carrington later became obsessed by Lytton Strachey, the eminent biographer and a central figure in the Bloomsbury Group.  After she married Ralph Partridge, the three formed a ménage a trois until Strachey’s death in 1932.  Soon after, Carrington took her own life.  Her affectionate 1916 study of Strachey is also displayed.

In bold contrast, Wyndham Lewis’s Vorticist-inspired portrait of Ezra Pound depicts the poet 1920 shortly after the first appearance of his major work, The Cantos.  This drawing is paired with Lewis’s portrait of Arthur Bliss which shows the composer in 1922, the year of the first performance of his celebrated Colour Symphony. Together they exemplify Lewis’s terse but telling draughtsmanship at this time.

The centre of the display is formed by a substantial group of portraits by William Rothenstein allocated to the Gallery by HM Government as part of the in lieu scheme.  Sitters include include the conductor Sir Henry Wood;  the creators of the garden at Sissinghurst, Harold Nicolson and Vita Sackville-West; and the artist Leon Underwood.  His portrait of Frieda Lawrence, who was described by her husband D H Lawrence as ‘the one possible woman for me’, is shown alongside.

The display concludes with major post-war additions to the collection, including Stanley Spencer’s magisterial 1951drawing of Sir John Rothenstein who was then Director of the Tate Gallery; the only drawing of the poet Ted Hughes – sketched by his wife the writer Sylvia Plath on a sheet of her journal; and a moving portrait of Stephen Hawking by Yolande Sonnabend made in 1985.