The Life and Lives of Dr Johnson 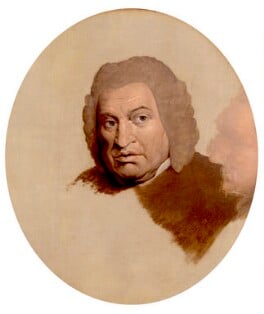 2009 marks the 300th anniversary of the birth of the writer, critic and lexicographer Dr Samuel Johnson (1709-1784).  After travelling to London from Lichfield in 1737, Johnson found fame with the publication of his great Dictionary of the English Language in 1755.  He went on to become one of the most celebrated men of the eighteenth century, attracting praise for his poetry, essays, biographies and conversational talents.

This display celebrates Johnson’s life and focuses particularly on his role in the development of biography, a literary form with which the National Portrait Gallery is closely linked.  Through works such as The Life of Richard Savage (1744) and The Lives of the Most Eminent English Poets (1781), Johnson transformed the genre by introducing a greater emphasis on character and by empathising with his subjects.  In doing so he raised the status of what was previously considered to be a ‘low’ form of literature, but also made it possible for his readers to relate to great men such as Francis Drake, John Dryden and Alexander Pope.

When Johnson died in 1784, a number of works about his own life appeared, several written by close friends and acquaintances including Hester Lynch Piozzi (1741-1821) and James Boswell (1740-1795).  The direct influence of Johnson as biographer can be seen in these works and in other biographies thereafter.

Using prints and drawings from the Gallery’s collection, this display brings together portraits of Johnson and his circle, as well as people whose ‘lives’ he wrote and his own contemporary biographers.  It also includes some of the many satirical prints that emerged after Johnson’s death in response to the race to record his life.