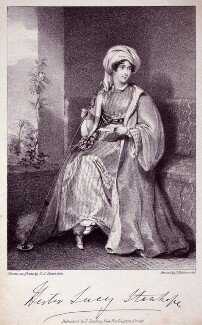 The women portrayed here all travelled independently around the world, at a time when such an activity was regarded with suspicion by the general public. They exhibited great resolve by travelling alone in the face of society's expectations and prejudices and, in some cases, of their own financial constraints.

In an attempt to minimise such public disapproval, women explorers often went out of their way to demonstrate their conservatism in all other aspects of their lives, whether through their clothes, their behaviour or their political views. Although quite at ease riding alone through a Middle Eastern desert, these women might refuse to walk unchaperoned along Piccadilly. While living lives of the utmost independence abroad, some campaigned for or supported the Anti-Suffrage League, which actively opposed women having the right to vote.

Women travelled for many reasons. Some went because they were of independent means and without domestic ties; in other words, because they could. Some travelled for their health. Others were storytellers, weaving tales about the people they encountered. Between them, these extraordinary women included scholars, archaeologists, authors, botanists and painters.