Venita Dearden’s book Glastonbury – Another Stage (2010) celebrates the 40th anniversary of the Glastonbury festival, and her fifth consecutive year of shooting in a studio on site. The 16 photographs on display will be include Shirley Bassey, Lily Allen and Pete Townshend

Dearden grew up next to the festival site and has been involved with Glastonbury since a young age. Her book Somerset Stories, Fivepenny Dreams was published in 2008. Since 2004, Dearden has been documenting the music festival and taking portraits in an on-site temporary studio. The portraits are all shot against a white studio backdrop removing the sitters from the context of the festival. The wellington boots, flip flops and muddy footprints at the bottom of the photographs are clues as to the location of the shoot. The portraits offer a glimpse of the diversity and character of the 150,000 visitors who converge on Glastonbury music festival, now in its fortieth year.

Born in 1975, Venita Dearden grew up in Somerset next to the festival site and has been attending and working at the Glastonbury festival since a young age. Her work was included in the Photographic Portrait Prize in 2006 and 2007. Her photographs have appeared in publications such as Vogue, Wallpaper, Harpers Bazaar and The Sunday Times Magazine. 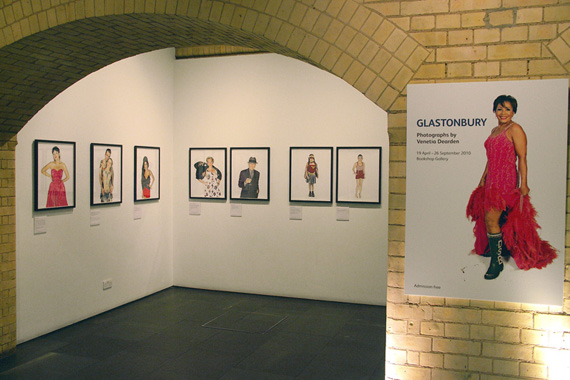