The Dalziel Brothers: A Family of Engravers 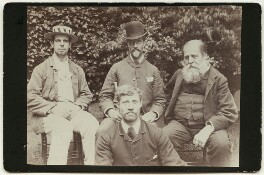 The mid-Victorian period saw a significant change in the status of illustration. The spread of literacy, a rising middle-class, improvements in printing technology and cheaper book production costs resulted in a growing market for books and magazines. Most literature was illustrated and by the 1860s illustration entered its ‘golden age’. One name appeared on nearly every major illustrated book published in Britain from 1840 to 1890 – that of The Brothers Dalziel.

Originating from Wooler, Northumberland, the Dalziels set up London’s largest and most influential wood-engraving firm. More than just engravers, they were also draughtsmen, printers, publishers and entrepreneurs who built relationships with the leading artists of the day, particularly the Pre-Raphaelite Brotherhood and those of the Idyllic School, whose designs they engraved. The Camden Press, which they established in 1857, enabled them to commission and print their own books.

Today, their work is represented in important collections worldwide, but few images of the Dalziels themselves survive. This display features a selection from the Gallery’s recently researched, little-known collection of rare family photographs of the Dalziels.