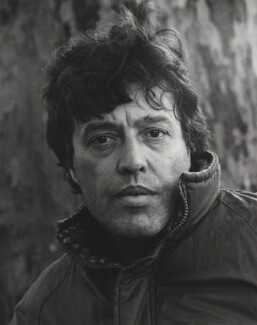 Born in 1932, Dmitri Kasterine was the son of a White Russian army officer, Nicolas Kasterine, and a British-born mother, Katherine White. Kasterine was educated at Radley College, Oxfordshire. He began his professional career as a photographer in 1961, working for publications such as Jocelyn Steven's Queen, a magazine that helped set the visual agenda of the 1960s. Kasterine enjoyed a long association with film director Stanley Kubrick, taking stills on Dr Strangelove (1964), 2001: A Space Odyssey (1968) and A Clockwork Orange (1971).

Dmitri Kasterine was one of the most significant portrait photographers working in Britain from the late 1960s to the mid-1980s. This display shows for the first time an important group of his portraits acquired in 2009, which presents a cross section of the most eminent cultural figures of the twentieth century. These include Samuel Beckett taken in 1965, whilst at a rehearsal for Beginning to End, a one-man show for actor Jack MacGowran, devised by Beckett for the BBC arts programme Monitor.

Other important photographs include his portrait of Beryl Bainbridge (1972), and his 1974 portraits of Al Alvarez, and David Hockney. His photographs of the late 1970s and early 1980s include Roald Dahl (1976), Francis Bacon (1978), David Niven (1979), and portraits taken on location of Robert Graves at home in Majorca (1980), Lawrence Durrell at home in Provence (1976), and Muriel Spark (1978) outside the Tuscan farm house in the village of Civitella della Chiana.

In 1986, Dmitri Kasterine left Britain to move to the United States, which he had first visited on an assignment to photograph Mick Jagger in LA for Radio Times. Dmitri Kasterine has produced the personal photographic survey England and the English (1981). He is currently working on book projects documenting the experiences of residents living in Newburgh and Brooklyn, New York.

More information on Dmitri Kasterine's work can be found on his website www.kasterine.com