The Three Witches from Macbeth 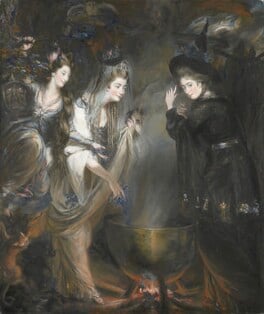 This unusual group portrait depicts three of the most politically influential and socially notorious women of the period. They are, from left to right, the society ladies and political hostesses Elizabeth Lamb, Viscountess Melbourne, Georgiana, Duchess of Devonshire and the sculptor Anne Seymour Damer.

All three women were intimate friends sharing a common passion for Whig politics and the arts. Whereas Lady Melbourne had been friends with Anne Seymour Damer since the early 1770s, the friendship with Georgiana was fairly recent and this pastel may in part be related to Melbourne’s desire to celebrate their new-found friendship. While all three women are described as having enjoyed attending private theatricals and tableaux vivants, Daniel Gardner’s choice of the cauldron scene from Macbeth can also be related to their shared and shadowy political machinations as leading members of the Devonshire House circle, which became a focal point for supporters of the leader of the Whigs, Charles James Fox.

Shakespearean scenes had been growing in popularity since the first decades of the eighteenthcentury and by the 1760s, the craze was well established in British visual culture. Macbeth, in particular, had undergone a significant revival with actor and theatre manager David Garrick’s revival of the play’s original script. Due to the contemporary interest in the supernatural, the sublime and the Gothic, the Witches’ appearance was one of the most popular scenes with theatre-goers, and was also one of the most frequently painted scenes from Shakespeare during the eighteenth century.

The portrait’s composition has no parallel in Gardner’s oeuvre and it is possible that either Damer or Melbourne suggested the design. Melbourne is also thought to have commissioned the work which has descended through her family. Although there is no evidence of its being exhibited at the time, contemporaries clearly knew of its existence. It is mentioned in Lady Mary Coke’s journal of 1775 where she wrote of a drawing of ‘the Duchess of Devonshire, Lady Melburn, and Mrs Damer all being drawn in one picture in the Characters of the three Witches in Macbeth … They have chosen that Scene where they compose their Cauldron, but instead of “finger of Birth-strangled babe, etc” their Cauldron is composed of roses and carnations and I daresay they think their charmes more irresistible than all the magick of the Witches’.

The new aqcuisition is a significant addition to the National Portrait Gallery’s eighteenth-century collections where it helps to present a more representative view of female achievement in the eighteenth century. While each of the three sitters was influential, due to her lasting interest to biographers Georgiana, Duchess of Devonshire remains one of the greatest celebrities of her day and this is the first portrait the Gallery has acquired of her as an adult. It is also the first portrait it has acquired of Lady Melbourne.

The National Portrait Gallery is delighted to have recently acquired this portrait, which was allocated to the Gallery in February 2011 under the Acceptance in Lieu (AIL) Scheme by H.M. Government. This striking friendship portrait will be included in the exhibition The First Actresses: Nell Gwyn to Sarah Siddons (20 October 2011–8 January 2012) before going on temporary display in Room 17.