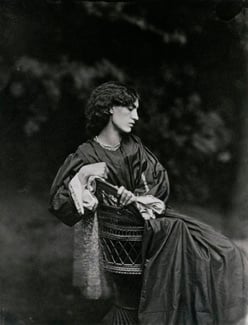 To mark the centenary of her death in January 1914, this display features the dark-haired Pre-Raphaelite model Jane Burden (Mrs William Morris).  Born in 1839, daughter of a stableman and laundress, she is seen in iconic guise  - as Pandora, Proserpine, Astarte - in many paintings by Dante Gabriel Rossetti.

In her own right she was a renowned embroiderer in the Arts & Crafts movement, and actively involved in the family firm Morris & Co.  Known to family and friends as Janey, she is seen here in photographs taken by Frederick Hollyer in 1874 and by Emery Walker in 1898, together with portraits of her husband, poet, designer and Socialist, their daughters  Jenny and May, and friends Georgiana (‘Georgie’) and Edward (‘Ned’) Burne-Jones.

Other works portray  her circle of close friends: Rosalind Howard, Countess of Carlisle, suffragist Jane Cobden, architect Philip Webb, poet Algernon Swinburne and artist Marie Stillman, and her lovers Rossetti and Wilfred Scawen Blunt. Several images in this four-case display are prints that Jane herself owned; those of her in widowhood, taken at Kelmscott Manor, are previously unshown. 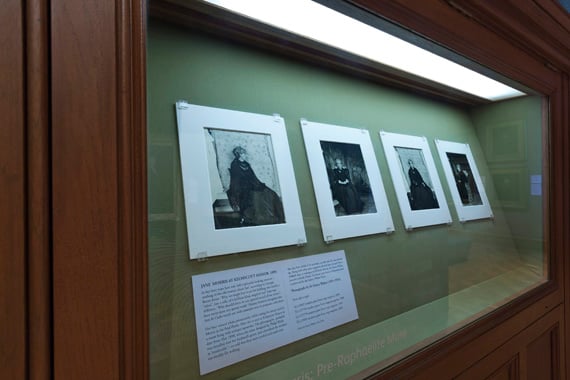