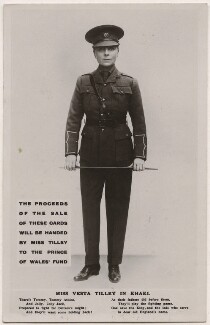 Gwendoline Brogden as Signora Maria Gesticulata in 'The Girl on the Film'
by Foulsham & Banfield, published by Rotary Photographic Co Ltd
1913
NPG Ax160364

The patriotic song ‘Till the boys come home’ (‘Keep the home fires burning’), to words by American poet Lena Guilbert Ford, was composed by Ivor Novello in 1914.  It quickly established itself as a favourite during the First World War and made a name for its young composer.  Novello was one of the many people working in the theatre who provided entertainment in the music halls, revues and musical comedies that dominated the stage during the years of conflict and this display, drawing on the Gallery’s vast photographic collections, recalls some of the most popular stars of the day.

During the early years of the war traditional music hall still enjoyed success and its singers and comedians rallied to support the war effort by singing patriotic and sentimental songs to boost morale and, in the years before conscription, to promote recruitment.  The greatest male impersonator of the halls, Vesta Tilley, became known as Britain's Best Recruiting Sergeant for the many enlistments she enticed from the stage.  Songs such as ‘I'll make a man of you’, performed by Gwendoline Brogden in The Passing Show in the summer of 1914, played to the manhood of young men; while the redoubtable Marie Lloyd's ‘Boys in khaki boys in blue’, dedicated to the army and navy, appealed to their patriotism.  However, as the war dragged on, there began to emerge a note of cynicism, brought home from the front, for example, in the trench songs performed by Hetty King, and most notoriously expressed in 1917 by Ella Shields's ‘Oh! It’s a lovely war’.

These were also years of change as revues and musical comedies began to take the place of the mixed bills offered by the music halls.  The Bing Boys Are Here was the first of a series of revues that played at the Alhambra Theatre in London during the last two years of the war.  It opened in 1916, starring music hall comedian and singer George Robey and Violet Loraine, who introduced the song ‘If you were the only girl in the world’, and it became one of the most important musical hits during the war.  In the same year, Oscar Asche produced and starred in the exotic musical comedy Chu Chin Chow (based on the story of Ali Baba and the Forty Thieves) at His Majesty’s Theatre in London, which ran for five years and a total of 2,238 performances.  By 1917 Siegfried Sassoon's "silly patriotic music halls" and the stars they produced were gradually being eclipsed by a new generation of popular actors and singers who provided the necessary escape from the harsh reality of warfare. 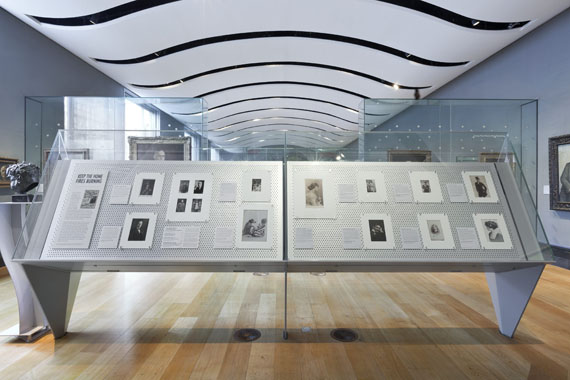