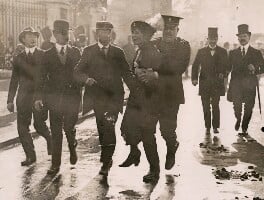 This showcase display looks back one century, to the spring and summer of 1914, when militant suffragettes staged their final violent protests in favour of votes for women and specifically against the imprisonment and inhumane treatment of women as part of the government’s Cat and Mouse Act of 1913.  Amongst other targets, certain suffragettes chose to attack paintings in public galleries, including the National Portrait Gallery.  This display will focus on the protagonists of the attacks and the reaction of the police, the press and the National Portrait Gallery itself to their actions.

The women who perpetrated the attacks at the Galleries were affiliated to the Women’s Social and Political Union (WSPU).  Founded in Manchester in1903 by Emmeline Pankhurst, the aim of the WSPU was to secure the right to vote for women in the United Kingdom by any means.  With the motto ‘Deeds not Words’, it pioneered a campaign of civil disobedience and vandalism.  The attacks ceased at the outbreak of the First World War, when the suffragettes agreed a truce in favour of the war effort.

The display includes photographs of Emmeline Pankhurst and Mary Richardson, notorious for attacking the ‘Rokeby Venus’ by Diego Velasquez at the National Gallery.  It also includes original documents from the Gallery’s archive, and surveillance photographs showing a number of Suffragettes which were issued to the Gallery by the Criminal Record Bureau in 1914. 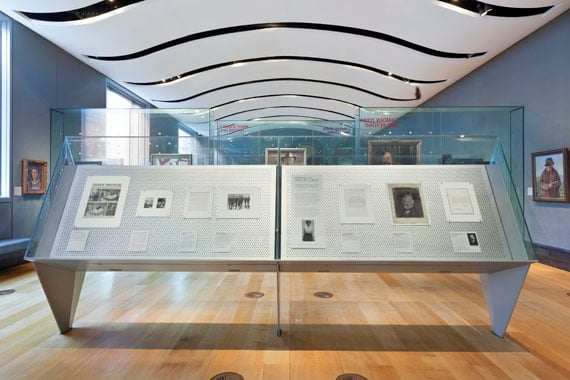