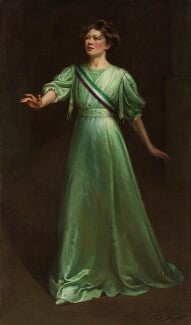 A leading Suffragette, Christabel Pankhurst was one of the primary strategists of the campaign for women’s right to vote in the first decades of the twentieth century.  Throughout the nineteenth century, numerous petitions to parliament, demanding women’s political enfranchisement, had been unsuccessful.  As a consequence, at the start of the twentieth century, women had virtually no influence in the making of policies which would directly affect their lives.

Pankhurst trained as a lawyer at Manchester University but, as a woman, was unable to practise as a barrister.  In 1903, Christabel’s mother Emmeline Pankhurst established the organisation, the Women’s Social and Political Union, which galvanised the suffrage movement. With her sisters Sylvia and Adela, Christabel Pankhurst was a founding member, applying her legal knowledge in speeches and pamphlets to highlight inequality and injustice experienced by women.  She also organised large-scale processions and demonstrations in favour of ‘Votes for Women’, attracting thousands of supporters to the cause.

From 1905, Pankhurst advocated a campaign of civil disobedience which, by the outbreak of World War One, had escalated to include arson, bombing and attacks on works of art in public galleries.  This aspect is explored in the showcase display Suffragettes: Deeds not Words.

This unique portrait shows Christabel Pankhurst as a figurehead of the suffrage movement, wearing the sash in the distinctive purple, green and white colours of the Women’s Social and Political Union.  It was painted by Ethel Wright, a society portrait painter who supported the cause, and was first shown at the Women’s Exhibition in London in 1909, a spectacular fundraising event which highlighted women’s skills and potential.