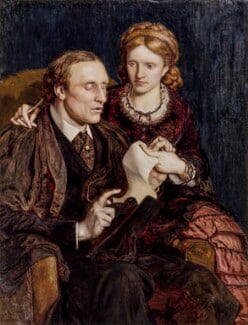 This anniversary display commemorates the passing of the Representation of the People Act on 6 February 1918, which gave thousands of British women the right to vote in general elections, an important stepping stone towards ‘universal suffrage’ for both sexes, which was finally achieved a decade later.  The Act was the culmination of a decades-long public campaign and the portraits in this display represent some of the key figures involved in the struggle for political representation.  The display includes paintings, works on paper and photographs representing key figures in the campaign for women’s suffrage, both for and against, from the mid-nineteenth century to the years after the vote was won.

The modern campaign for ‘Votes for Women’ formally began in 1867 when the first petition on the subject, the ‘Ladies’ Petition’, was presented to the government.  This the precedent for the ‘constitutional’ campaign led by ‘Suffragists’ including Millicent Garrett Fawcett.

An alternative approach was pioneered by the ‘Suffragettes’ led by Emmeline Pankhurst, founder of the militant organisation the Women’s Social and Political Union (WSPU).  Whilst orchestrating acts of civil disobedience, the WSPU were masters of propaganda from spectacular demonstrations and marches to poster campaigns. Violence, including arson and bombing characterised the last years of the campaign, and included an attack on the portrait of Thomas Carlyle by Millais the National Portrait Gallery. The militants galvanised opponents to women’s suffrage, from Prime Minister Herbert Asquith to the writer Mrs Humphry Ward.

From 1914, women’s positive contribution to the home front during First World War, significantly shifted attitudes.  From this point, votes for women became inevitable.

A complementary showcase display highlighting Victorian pioneers of the movement is on display in room 25.

A range of gifts and products inspired by the display, are now available to pre-order and buy from the Gallery shops and online