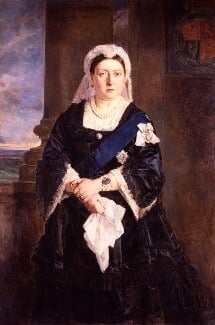 Queen Victoria
by Lady Julia Abercromby, after Heinrich von Angeli
1883, based on a work of 1875
NPG 708

Queen Victoria was born on 24 May 1819 at Kensington Palace, London. She ascended to the throne aged eighteen following the death of her uncle King William IV in 1837, and ruled for over sixty years.

Victoria remains one of the world’s best-known monarchs. Her image is still recognisable and her life story continues to fascinate in the form of biographies, films and television dramas.

Victoria’s birth was the result of a drive to produce an heir to the British throne following the death of Princess Charlotte of Wales in 1817, daughter of Victoria’s uncle King George IV. In order to achieve a legitimate heir, Victoria’s father Edward, Duke of Kent, had abandoned his mistress of many years and married a young widow, Princess Victoire of Saxe-Coburg-Saalfield. Princess Victoria was born the following year.

The portraits of Victoria in this temporary display, including rarely-displayed sketches and watercolours, represent the queen at different moments during her long reign. The earliest, by Sir David Wilkie, was made shortly after the teenage princess became queen, and the latest, by Sir William Quiller-Orchardson, shows the queen with her heirs, alluding to the extensive dynasty that was part of her legacy. Victoria died in 1901, leaving behind an expansive British Empire, and a country that had been transformed by social and technological advances.