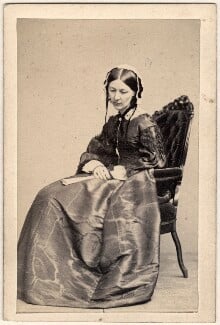 Hot on the heels of George Eliot’s 2019 bicentenary display is a new one commemorating 200 years since the birth of another remarkable Victorian woman, Florence Nightingale (1820–1910). Nightingale’s pioneering care of sick and wounded soldiers during the Crimean War (1853–6) catapulted her into the public eye, making her a national cultural icon and an exemplar of female virtue. The newspaper press nicknamed her ‘The Lady with the Lamp’ owing to the nightly rounds she made by lantern light to tend to the soldiers. Like George Eliot, Florence despised sitting for her portrait and did so with the greatest reluctance. Consequently, and despite the demand for her image, few portraits of her survive.

Florence contracted a serious illness during her inspection of the Crimean field hospitals (now believed to have been the bacterial infection brucellosis), which left her bedridden for much of the rest of her life. But this did not curtail her efforts to improve the standards of nursing. Performed away from the public eye and largely from her sickbed, she campaigned for public healthcare reform, supervised the modernisation of nursing, and advised governments on army health provision, sanitation improvements and hospital design. In 1883, she was awarded the Royal Red Cross and, in 1907, was the first woman to receive the Order of Merit, Britain’s highest civilian decoration. A trailblazer of her time, her legacy lives still on today.

This new display, which includes watercolours, photographs and a commemorative medal, traces the image of the woman who transformed the public image of nursing.