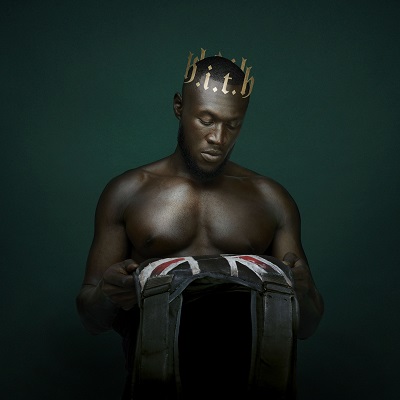 Stormzy
by Mark Mattock with art direction by Hales Curtis, 2019

We are delighted to announce a new addition to the Victorian Galleries, a portrait of Croydon-born British musician Stormzy.

Rapping since the age of eleven, Stormzy rose to prominence in 2014 with his Wicked Skengman freestyles and self-released debut EP Dreamers Disease. In 2015 his single ‘Shut Up’ reached seventeen million views online, and the album was officially released.  It became the first freestyle to reach the UK charts, and twice earned him the Best Grime Act MOBO award. In 2017, Stormzy’s ‘Gang Signs & Prayer’ was the first Grime album to reach number one in the UK album charts. He is also the first British rapper to have headlined the Pyramid Stage at Glastonbury Festival (2019).

Besides his significant contribution to music Stormzy is an active supporter of minority groups and funds two Cambridge University scholarships for black students. He also champions young people, launching a new writer’s prize for authors under the age of 30.

This portrait by Mark Mattock,  features the Croydon rapper wearing a crown made up of the letters HITH, standing for Heavy Is the Head, the name of his new album. He is pictured gazing at the Banksy-designed stab-proof vest he wore for his seminal headline performance at 2019’s Glastonbury festival.

The Gallery director Nicholas Cullinan commented “Stormzy has undoubtedly had a significant influence on British culture today, both through his music and work with minority groups and young people, and we hope our visitors will enjoy the juxtaposition of this new work with historic paintings of influential figures from the Victorian era, from politicians, royalty and radicals to artists, sporting heroes and singers.”