Photograph of the Month - February 2014 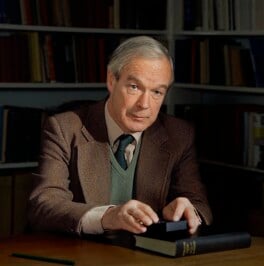 Born in Oxfordshire, Hodgkin received a scholarship to Trinity College, Cambridge where he began to study the application of energy to nerve fibres. In 1939 he collaborated with Andrew Huxley, a recent graduate, to research the electrical potential of nerves. By inserting an electrode into a nerve of a squid they discovered that the internal potential rose from a negative resting value to a positive value, far higher than the external potential. This was contrary to contemporary theories which suggested that the result should only equal the external potential. They described this as ‘overshoot.’

With the outbreak of war in 1939 Hodgkin suspended his research and volunteered for the RAF. After working on the effects of high altitude flying in unpressurised planes he was transferred to work on developing short-wave airborne radar in a bid to improve aircraft interception. This work allowed for the design of radar for night bombers that could provide the range of a target, allowing for blind-firing. In 1992 Hodgkin published his autobiography in memory of the scientists who had lost their lives during the war-time work on radar; it was titled Chance and Design: Reminiscences of Science in Peace and War.

In the post-war years Hodgkin and Huxley resumed their work and focused on ascertaining the cause of the ‘overshoot’. They theorised that the unexpected rise in the internal positive charge was a result of the presence of sodium ions. The results of the study were published in 1952 and led to Hodgkin and Huxley being jointly awarded the Nobel Prize for Physiology or Medicine in 1963.

Later in his career Hodgkin served as President of the Royal Society (1970-75) and was appointed Master of Trinity College, Cambridge in 1978, a position he held for six years.

One of 140 dye transfer prints  and related negatives given to the Gallery in 2007 by the Bernard Schwartz Foundation. The Foundation funded the cataloguing and digitisation of the collection, and established a series of biannual 'Masters of Photography' lectures.