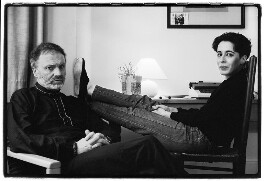 Geoffrey Hill (b.1932) is the newly elected Professor of Poetry at Oxford. The professorship, established 300 years ago, has been held by poets including Matthew Arnold, W.H. Auden and Seamus Heaney. It was in the early 1950s when an undergraduate at Keble College, Oxford, that Hill established himself as a poet. His recent collections are Without Title (2006), Selected Poems (2006), and A Treatise of Civil Power (2005, 2007).

Alice Goodman (b.1958) married Geoffrey Hill in 1987. She has collaborated with composer John
Adams, writing the libretti for the operas Nixon in China (1987) and The Death of Klinghoffer (1991). Ordained in 2001, she is a chaplain at Trinity College, Cambridge.

This portrait appears on the cover of Judith Aronson's new book Likenesses, with a foreword by Charles Saumarez Smith, published July 2010, (available from the Gallery shop RRP £19.95).