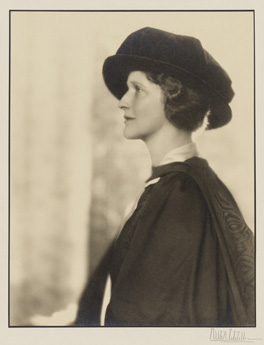 May 2014 marks 50 years since the death of Nancy Astor, the first woman to sit as a Member of Parliament. Born into a wealthy family in Virginia, USA, Astor grew up in a competitive environment alongside ten siblings. In 1904, after a failed early marriage, she moved to England where she met a wealthy American, Waldorf Astor, whom she married in 1906. In 1910 Waldorf Astor was elected Member of Parliament for Plymouth but in 1919 he was forced to relinquish his seat when he succeeded his father as 2nd Viscount Astor and became a member of the House of Lords. He actively promoted his wife as a candidate for the Plymouth by-election and, although many believed women were not suited to politics, she won the election and became the first woman to sit in the House of Commons.

Astor demonstrated her commitment to a range of feminist issues: among the policies she supported were equal employment and the raising of the age of consent. She was also a keen advocate for temperance reform despite it being a topic avoided by most politicians.

Towards the end of the 1920s Astor’s career began to be overshadowed by other female politicians and she was repeatedly overlooked for a position in Prime Minister Stanley Baldwin’s cabinets. In the 1930s the Astors’ reputation suffered from allegations that they were at the centre of a group of well-connected individuals who had undue influence over the government. The embarrassment caused by these claims led the Conservative Party to further sideline Nancy Astor. By 1945 there seemed little likelihood of her re-election and she stood down after over twenty-five years as a Member of Parliament. In a 1956 radio interview she proudly described Plymouth as a ‘brave constituency’ that had ‘stuck’ with her despite her willingness to support unfashionable policies.

The portrait is shown alongside a 1920s portrait by George Beresford and a portrait taken by Cecil Beaton in 1949.