Photograph of the Month - November 2009 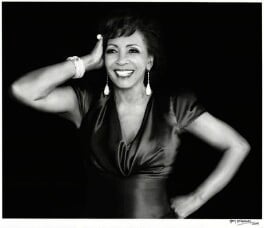 Singer and entertainer. Bassey was born in Tiger Bay, Cardiff. Her musical career was launched in 1957 with the Banana Boat Song. Bassey's 50 year career has included over 30 hit singles, 33 hit albums, and title songs to the James Bond films Goldfinger (1964) and Diamonds Are Forever (1971). Bassey was made a Dame of the British Empire in 1999. This portrait was commissioned for the cover of The Performance, Bassey's first album of original material in 20 years, released on 9 November 2009. Produced by Bond composer David Arnold, the album includes songs written by Gary Barlow, Pet Shop Boys, Rufus Wainwright, KT Tunstall and Manic Street Preachers.

McCartney started her photographic career in 1995. Her assignments have included editorial work for Harpers Bazaar and Interview, and advertising campaigns for Stella McCartney, Adidas, and Aga. Mary McCartney's most recent exhibition ‘British Style Observed' was exhibited at The Natural History Museum in September 2008.