Photograph of the Month - September 2012 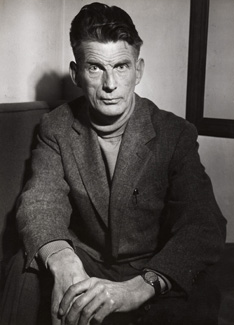 Born in Dublin, Beckett studied at Trinity College (1923–7) in his hometown. He became an English assistant at the École normale supérieure, Paris, where he settled in 1932. He wrote poetry, reviews and his first novels, Murphy (1938) and Watt (1953), in English. Most subsequent works were written in French including the novel trilogy; Molloy (1951) Malone Dies (1951) and The Unnameable (1953) and his play En attendant Godot (Waiting for Godot). Godot premiered in Paris in 1953 and in London two years later, bringing Beckett’s tragicomic outlook on the human predicament international renown. Endgame, premiered in French in London in the year of this portrait. Beckett was awarded the 1969 Nobel Prize for literature.

Like Beckett, the Hungarian-born photographer was a self-exiled Parisian whose photographic insights of the city published as Paris de nuit (1933), Camera in Paris (1949) and Graffiti (1960) comprise a significant contribution to twentieth-century photography. Brassaï’s collaboration with Harper’s Bazaar, for which he produced this portrait, lasted twenty years.