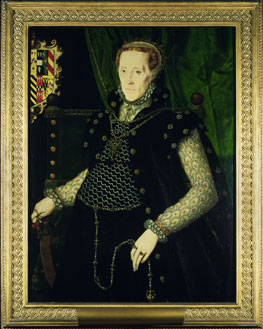 Immerse yourself in history, art and culture at our popular Lunchtime Lectures. Doors open at 12.45. Lectures begin at 13.15 and last approximately one hour.

Art historian Karen Hearn discusses the portrait of Mildred Cooke, Lady Cecil (1526-89) in which she was painted visibly with child by Hans Eworth in about 1563  – one of the earliest examples of a ‘pregnancy portrait’ and putting this portrait in context.

Lady Cecil was one of the most learned women of her time. Her husband William Cecil, later Lord Burghley, Elizabeth I’s trusted chief minister, was born 500 years ago this year. In 16th and early 17th England, painted portraits that showed a woman as visibly, even exaggeratedly, pregnant, were surprisingly numerous.  There were various reasons why this apparently anomalous form of presentation was current here. They included the dynastic ambition of the self-made families (like the Cecils) who rose up under Henry VIII and his Tudor successors; religious conviction (particularly among Protestant families, like the Cecils); national concerns about the royal succession under the childless Elizabeth I; and, perhaps especially, anxiety that the sitter might die in childbed.

Karen Hearn was previously the Curator of 16th & 17th Century British Art at Tate Britain, where she curated the landmark exhibition Dynasties: Painting in Tudor & Jacobean England 1530-1630. A prolific author on the art of these periods, she is now an Honorary Professor at University College London.