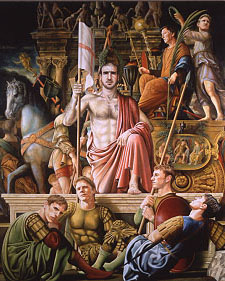 Painting the Century brings together 101 major portraits, loaned from collections around the world, in what is probably the most ambitious exhibition being mounted in London to celebrate the new millennium.

For every year of the twentieth century, the exhibition displays one portrait, painted in that year, by artists of the stature of Munch, Picasso, Beckmann, Grosz, Bacon, Warhol and Freud. Sitters as diverse as Lenin, Elvis Presley, Margaret Thatcher and David Bowie are seen in the context of a comprehensive chronology of the history and culture of our times.

As well as major works by outstanding painters of the century, such as Schiele, Hockney, Sutherland, the German Neue Sachlichkeit painters and American realists and photo-realists, the exhibition also includes a number of popular works by lesser-known artists such as Tamara de Lempicka's 1925 Autoportrait (in the green Bugatti) and CW Furse's Diana of the Uplands (1903/4).

Each portrait has been chosen for its artistic, cultural or historical significance at the time, and for its relevance to works in adjacent years. The exhibition, divided into ten decades, will provide not only a wide-ranging view of some of the cultural and historical milestones of an unsettled era, but will also reflect the extraordinary revolutions and the survival of traditional modes which have characterised the art of the last century.

The exhibition is organised and selected by Robin Gibson, Chief Curator at the National Portrait Gallery.

The exhibition is accompanied by a fully illustrated catalogue, published in October 2000, including an essay by Norbert Lynton, chronology and information on each painting. 256 pages with 100 colour and 25 black and white illustrations. Hardback £30, paperback £20.