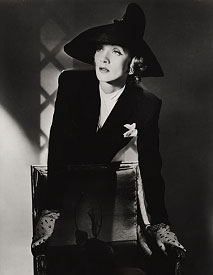 In the first exhibition solely devoted to Horst's portraits, the National Portrait Gallery celebrates one of the great master photographers of the 20th century. It brings together 150 stunning portraits, taken largely during his career at Vogue, where his name became synonymous with style and glamour.

Captured over six decades, Horst's evocative portraits of leading figures from the worlds of art, literature, fashion and celebrity left a lasting influence on a generation of photographers from Herb Ritts to Robert Mapplethorpe.

Among those immortalised by his classic style were stars of the silver screen from Marlene Dietrich to Bette Davis, artists and writers including Salvador Dali and Jean Cocteau and fashion icons from Coco Chanel to Calvin Klein.

An exhibition catalogue is available priced £30 hardback and £9.95 mini paperback

In twentieth century photography Horst's name has become synonymous with the creation of images of elegance, style, allure and rarefied glamour. This first exhibition devoted solely to his portraits is intended to celebrate and illuminate his visual legacy. The key to Horst's enduring and classical style was in his ability to use lighting to define his subjects in architectural and linear compositions, whilst retaining a psychological insight into their characters.

Horst Paul Albert Bohrmann was born on 14 August 1906, in Weissenfels-an-der-Saale, a town in East Germany. Ambitious to leave the confines of his childhood Horst was by the end of l930 in Paris, working as an assistant and sometime model to French Vogue's chief photographer George Hoyningen-Huene. He had previously been a student studying furniture design under the Bauhaus's Walter Gropius in Hamburg and then had a shortlived student apprenticeship in Paris with the modern architect Le Corbusier.

Horst's career at Vogue, starting in 1931, epitomised the cross-currents of art, fashion and high society in Paris - the world to which he was introduced by his closeness to Huene. Horst became friends with, among others, the artists Christian Bérard and Jean Cocteau, and designers Coco Chanel and her great rival Elsa Schiaparelli.

The late 1930s and early 1940s (before he joined the American Army in l943) saw Horst at the height of his powers as a studio photographer. His subjects changed from European Society to a new elite then spellbinding the moviegoers and magazine readers: the Hollywood stars such as Bette Davis, Joan Crawford, Rita Hayworth, Veronica Lake and Ingrid Bergman.

Horst returned to Vogue and continued to work steadily in fashion and portraiture but in the post-war world the demand was for a new naturalness that required his work to be on location and out of the studio. It was not until the 1980s that fashion changed again and Horst could re-invent his studio style with which he felt most at home.

This time he had become a legendary figure and a whole new generation of photographers had sprung up to reinterpret and pay homage to his original style which he also continued to reinvent.

His life encompassed a career that was both literally and metaphorically "Always In Vogue".