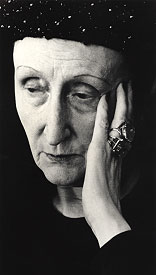 Supported by the American Friends of the National Portrait Gallery

The first exhibition in Europe of the American photographer, best known for her portraits of American and British poets and artists from the 1950s to the 1980s. Subjects include W.H. Auden and T.S. Eliot, Dylan Thomas and Ezra Pound, Sylvia Plath and Ted Hughes and artists and photographers including Bill Brandt, Laura Gilpin, John Minton and Henry Moore.

Born in Texas in 1918, McKenna began her photographic career at the age of 32, when she purchased her first camera on a visit to Paris. She formed close, even life-long, friendships with many of her subjects and re-photographed a number of them on several occasions. In 1965, McKenna produced a film entitled The Days of Dylan Thomas and in 1981 she published the photographic biography Portrait of Dylan: A Photographer's Memoir. A section of the exhibition is devoted to this writer.

A book accompanying the exhibition is available from the Gallery Shop priced £3.00.