Portraits of George Romney: An Iconography

The National Portrait Gallery is preparing a catalogue of its late 18th century collection for publication in 2003. The text is the work of John Ingamells, whose post is funded by the Paul Mellon Centre for British Art. This extract from the catalogue is a first complete draft of the section devoted to portraits of George Romney. Catalogue entries for portraits in the National Portrait Gallery are followed by an iconography of portraits of Romney in other collections.

'The person of Romney was rather tall, his features were broad and strong, his hair was dark, his eyes indicated much vigour, and still more acuteness of mind. His feelings were perilously acute. They made him a man of many frailties, but the primary characteristic of his nature was that true Christian charity, which more than compensates for manifold imperfections' (William Hayley; Romney 1809, pp.300-01).

'shy, private, studious and contemplative; conscious of all the disadvantages of a very stinted education; of a habit naturally hypochondriac. With aspen nerves, that every breath could ruffle' (R. Cumberland, Memoirs, 1807, ii, p.211).

Portraits of Romney in the National Portrait Gallery 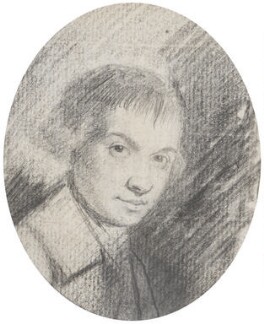 The identity is traditional; the pose is that of a self portrait, and the sitter's apparent age suggests the date of c.1765-70. The most impressive of Romney's self portraits, no.959 was painted for William Hayley of Eartham. He recalled that in the autumn of 1784 Romney 'began at my request the striking resemblance of himself in oil, which may be regarded as the best of his portraits the frontispiece to this volume with the year of his age, forty-nine [i.e. between December 1783 and November 1784]. It well expresses that pensive vivacity, and profusion of ideas, which a spectator might discover in his countenance, whenever he sat absorbed in studious meditation'.1
Elsewhere he wrote that it showed Romney 'as he appeared in the most active season of his existence'.2 Twenty years later a slightly different account was retailed by the artist's son, John Romney, who wrote that no.959 was begun in the autumn of 1782 and afterwards given to Hayley 'who did not allow him to finish it, but hurried it off to Eartham without delay'; the portrait was 'extremely like, and full of character' and showed his father at the age of forty eight [i.e. between December 1782 and November 1783].3 John Romney's account was repeated by Chamberlain in 1910.4 Though neither Hayley nor John Romney was infallible,5 the account of the former, as the patron and the earlier writer, might here be accepted.6 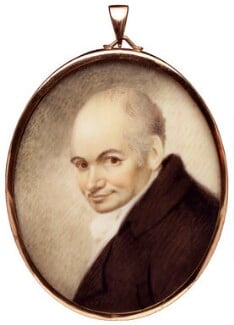 Literature : Richard Walker, Miniatures. 300 Years of the English Miniature Illustrated from the Collections of the National Portrait Gallery, 1998, no.59.

1 Old backing inscribed in Ernest Leggatt's hand: George Romney in 1798 Painted by Miss M Barrett a pupil of Romneys Purchased May 24 1894 at the sale of the late Miss Romney of Whitestock Hall Ulverstone.

The artist was studying under Romney in 1797,1 and the date of 1798 assigned to no.1881 at the Romney sale is here accepted. In 1798 Romney was suffering from 'lassitude of body, and restlessness of mind,' but in May he was 'very chearfully amused by sitting to a lady of the house [of the late Jeremiah Meyer], for his portrait; it was an ex tempore production; a rapid sketch; but a very striking resemblance'.2 This may possibly refer to no.1881 or to another Barret portrait.

c.1780 Painting, bust length to right, a vigorous sketch. Christie's, 8 June 1995, lot 28. Inscribed verso: 'Given to his pupil James Rawlinson'. The head compares with that in the 1778 self portrait.

A bust of Romney by S.N. Babb 1909 on the south front Victoria and Albert Museum.

Two paintings by Romney of 1796, The Four Friends (Abbot Hall AG, Kendal; exhibited Art Treasures of England RA 1998, no.57) and Flaxman modelling the bust of Hayley (Yale Center for British Art), each contain an insignificant head of the artist: 'from an excess of modesty, or from capricious indolence, [Romney] has so slighted each portrait of himself, in the two pictures, that both may be considered rather as caricatures, than fair likenesses of the painter' (Romney 1809, p.254). A version of the second composition, without Romney's head, is NPG 101, see R. Walker Regency Portraits, 1985, pp.186-87.

The so-called Artist with his Wife and Friends on Lake Windermere, exhibited Kenwood 1961(6), holds no significance as portraiture.

Of several pictures falsely identified as self portraits, mention might be made of those in the Uffizi (774A) and the Louvre (RF1095); the former remains unattributed, the latter is perhaps by George Willison.