The Conservation of Romney Paintings

The Conservation Centre in Liverpool is dedicated to the preservation and restoration of items of cultural significance, using a combination of traditional and modern techniques.

As part of the preparations for the exhibition, George Romney 1734-1802: British Art's Forgotten Genius, several Romney paintings were examined and treated. The processes and discoveries were recorded by using different kinds of photography, before, during and after treatment.

The investigations began with a thorough examination of the structure and surface of the paintings using 'non-destructive' methods. These included using special types of light, such as infrared and ultraviolet, to reveal different features of the paintings.

Raking light photography, taken with a strong directional light, was used to show compositional changes made during the painting process by Romney. It also reveals the texture and cracking patterns of the paint surface.

Information about the paint layers was used to inform decisions about aspects of aesthetic conservation treatment such cleaning, removal of discoloured varnish and restoration.

Tiny samples or 'cross sections' were taken from the paint and varnish. The samples, no bigger than the size of a pinhead, were taken from the extreme edges of the paintings, or from areas of loss. Once mounted in a clear synthetic resin, the layers are visible in cross-section using a microscope with high magnification. 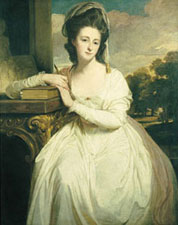 The findings were supported by an examination of paint colours at the very edge of the painting. The paint under the edge of the frame revealed a distinctly blue shade, whereas the area that had been exposed to light appeared pink.

It seems that the Prussian blue pigment has faded leaving behind the white and vermilion. This suggests that Romney intended the sky to have a bluer appearance than it now has. 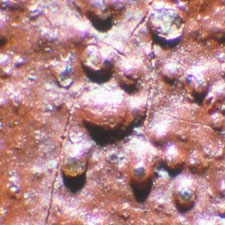 The analysis of Thomas Rackett uncovered an interesting paint defect. Microphotographs - slides taken using a microscope - revealed that the red of the jacket had formed tiny bubbles, as the result of an interaction between pigments and other paint ingredients.