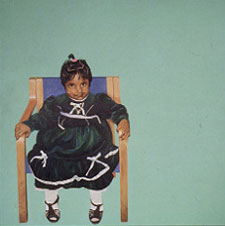 This powerful exhibition is the result of a remarkable collaboration between leading surgeon Iain Hutchison, consultant in Oral and Maxillofacial surgery (OMFS) at St Bartholomews and the Royal London Hospital, and highly acclaimed Glasgow artist Mark Gilbert. During a residency at St Bartholomews and the Royal London Hospital, Gilbert painted patients undergoing facial surgery for cancer or deformity and patients who had suffered severe facial injuries from car crashes, shotgun wounds or assault. These portraits interpret the patients' physical appearance before, after and, occasionally, during their corrective surgery. The exhibition displays portraits of 30 patients.

Gilbert watched many extensive facial operations. His powerful portraits capture more than just the simple form of the patients' faces. He conveys the intensity of the face damaged by trauma, or unveiled during the surgical process, as well as the changing emotions, character and confidence of the patients. The portraits chart the faces as they progress through their surgical and emotional journey.

Since the completion of the portraits, psychologist Dr Paul Farrand has studied the effects of the works on the sitters. Patients with facial deformity can have problems coming to terms with psychological factors which affect them. The surgery transforms them emotionally and their true character and psychological potential is released from the constraints of their pre-surgical facial appearance. Sitting for, and seeing, their portraits has had a cathartic effect on many of the cancer and trauma patients, allowing them to come to terms with their altered appearance more rapidly.