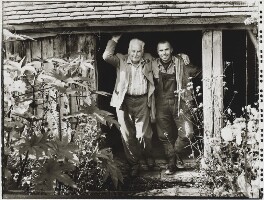 Following a recent commission from the National Portrait Gallery to photograph important British horticulturalists for its collection, Tessa Traeger and Patrick Kinmonth have photographed over 50 sitters working in the field, including gardeners, garden history writers, plant finders, garden designers and artists who are shaping new attitudes to plants and gardens.

The exhibition represents a cross-section of every aspect of gardening in the British Isles and is divided into sections in which the history of the British garden and a view of the contemporary gardener will be examined and considered:

The Garden Proposed examines the attitudes and inspirations that inform contemporary garden design, from the gardens of Dan Pearson and Penelope Hobhouse to the new developments in British land art and the work of Ian Hamilton Finlay and Andy Goldsworthy.

The Garden Preserved reveals a particularly British aspect, -the living heritage of great gardens in all their diversity. Portraits of gardens and their owners, head gardeners and garden pioneers, including Angelika Cawdor (Cawdor Castle) and John Sales (Stourhead) chart both the grandest restorations and the most dramatic transformations.

The Garden Explored deals with the extraordinary tradition and continuing British excellence in plant scholarship, expedition and exploration which, since the eighteenth century, has been a remarkable aspect of the British garden. Christopher Brickell of the Royal Horticultural Society and Tim Smit of the Eden Project feature, amongst others, in this section.

Tessa Traeger is one of the outstanding still-life photographers of her generation and has exhibited regularly since 1978 in Paris, London, Hamburg and New York. She is especially known for her photographs taken on large format cameras, many of which were published during her long association with British Vogue. Her collaborator on this project, Patrick Kinmonth, is known as a writer on photography, artistic director and opera designer. The exhibition is curated and designed by Patrick Kinmonth, who has also written the accompanying publication.