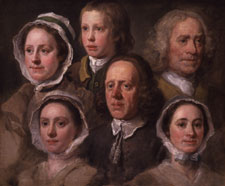 Supported by the Corporate Partners of the National Portrait Gallery

The traditional study of portraiture in Britain has concentrated on depictions of the upper classes and the celebrated. This ground-breaking exhibition aims to redress the balance by focusing on portraits of servants, from grooms to governesses, maids to musicians. This is the first ever study of portraits of servants in Britain and the exhibition will bring together many works that have rarely been seen in public. 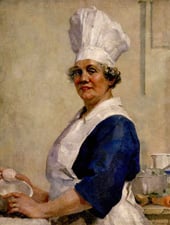 Servants and their lives have long been a favourite topic in literature, film and theatre, from the novels of Jane Austen and Charles Dickens and Oscar-winning films Remains of the Day and Gosford Park to the new BBC ONE drama series Servants. This exhibition presents around 100 portraits spanning from the 17th century to the 20th century and includes not only domestic servants but also institutional staff, for example the porter from the Royal Academy, the Arts Club cook and the British Museum's housekeeper. These intriguing and intimate portraits tell a fascinating story about power, class and human relationships, across four centuries.

The exhibition features sections addressing the survival of the medieval household, the loyal servant and servants at work and leisure, as well as social criticism and the decline of service. In addition to exploring country houses and their staff, the exhibition also considers questions of slavery, class and the sexual vulnerability of female servants. Below Stairs will also consider the servant in literature, illustration and theatre.

Viscount Coke with Heads of Department at Holkham
by Andrew Festing, 1993 Holkham Estate
© By kind permission of the Earl of Leicester and Trustees of the Holkham Estate

Many of the servants shown in the exhibition are known individuals and the exhibition and catalogue will uncover their long-forgotten stories. Some of them worked for famous people such as Queen Victoria and Admiral Nelson, others rose from servitude through their own hard work and ability to become established members of society. Other portraits in the exhibition use the servant as a character in narrative or genre paintings, sometimes humorous or moralistic, sometimes decorative, a tradition that dates from 17th-century Netherlandish painting.

Portraits of servants exist in larger numbers than has often been realised and the exhibition will illustrate the variety and also the ambiguity of this type of painting. The exhibition will present a document of the shifting organisation of households through the centuries, and at the same time it will investigate the complexity of the relationships between masters or mistresses and their servants. 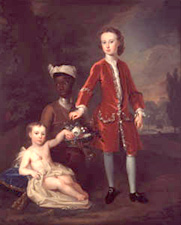 The Hon. John and the Hon. Thomas Hamilton with a Negro Servant
by William Aikman, 1728
The Mellerstain Trust

Many of the portraits in the exhibition were commissioned by employers who had formed a close attachment to their servants, in recognition of the loyalty, and sometimes the eccentricity, of those who worked for them. This tradition dates from the 17th century to the present day, with examples including a portrait by Marcus Gheeraerts of Tom Derry, Jester to Anne of Denmark (1614), William Hogarth's famous portrait of his own six servants (1750), Fish Nell, John Sutherland, Laundryman and "Dummy" King (1832) commissioned by the Duke of Buccleuch of his servants at Dalkeith House and the recent group portrait of the Heads of Department at Holkham Hall (1993) by Andrew Festing, commissioned by the current Earl of Leicester.

The exhibition is curated by Anne French and Giles Waterfield. Anne French is a freelance art historian and curator. She was previously Keeper of Fine Art at the Laing Art Gallery, Newcastle-upon-Tyne, and Acting Curator at Kenwood House. Her particular interest is eighteenth-century British Art and the Grand Tour. Giles Waterfield is an independent fine art curator, art historian and novelist. Director of the Dulwich Picture Gallery from 1979 - 1996, he is currently Director of the Attingham Summer School and Royal Collection Studies. He was also joint curator of Art Treasures of England at the Royal Academy of Arts and In Celebration: The Art of the Country House at Tate Britain.

Publication
The exhibition will be accompanied by a fully-illustrated catalogue by Anne French and Giles Waterfield, including an essay by National Portrait Gallery Leverhulme Fellow Matthew Craske. Below Stairs: 400 years of Servants' Portraits will be published by the National Portrait Gallery in October 2003. 212 pages, 135 illustrations (100 in colour), price £30 (hardback).

Conference
The traditional study of portraiture in Britain has concentrated on depictions of the upper classes and the celebrated. This ground-breaking exhibition aims to redress the balance by focusing on portraits of servants, from grooms to governesses, maids to musicians. This is the first ever study of portraits of servants in Britain and the exhibition will bring together many works that have rarely been seen in public.