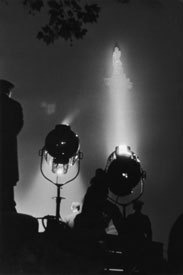 To coincide with the revitalisation of Trafalgar Square, Circling the Square celebrates the Square's history, through the eyes of generations of photographers, spanning over 160 years.

The display includes over 70 photographs that map the changing identity and shifting meanings of a space that has been described as the blank slab upon which Britain has inscribed its modern history. These are shown alongside more recent photographs taken in Trafalgar Square by groups of young people, including young homeless people from the London Connection day centre based at St Martin's in the Field, as part of a photography education programme organised by the National Portrait Gallery's Education Department.

The images on display capture the continuing cycle of political demonstrations, celebratory events and visitors to Trafalgar Square over the years featuring work by photographers including Henri Cartier Bresson, Don McCullin, Norman Parkinson and Oliver Toscani. Subjects include the coronation procession of King George VI in 1937, suffragette riots, a young Elizabeth Taylor being mobbed by pigeons, Michael Foot, Bertrand Russell, the poll tax demonstrations of 1990, and football's World Cup in 2002. Until recently itinerant photographers doubled as pigeon feed sellers and made postcard portraits to sell to tourists. The display includes intriguing and often humorous portraits of the innumerable tourists who have visited the Square over many decades to sit on the famous bronze lions and feed the pigeons.

With the rise of popular newspapers in the 1900s the need for a constant supply of photographs gave rise to a labyrinth of photographic press agencies. Photographers would be despatched to London landmarks to create pictures to add colour to the news pages. Typical and sellable stories included the use of the fountains and the lions as an impromptu adventure playground, the vagaries and extremes of the weather, the ever present problem of homelessness and vagrancy and the periodic cleaning of the column.