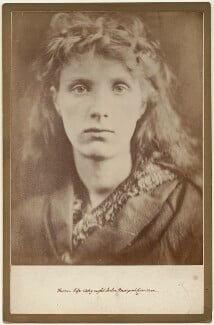 Julia Margaret Cameron (1815-1879) is one of the most important figures in the history of photography. Presented with a camera as a gift from her daughter, at the age of 48, she embraced photography with a passion bordering on obsession. Her subject matter consisted exclusively of portraits and fancy-dress tableaux. This exhibition brings together over 100 of Cameron's greatest images and will coincide with the publication by the J. Paul Getty Museum, Los Angeles of the first complete catalogue raisonné of her work. This exhibition is organised by the National Portrait Gallery, London, in collaboration with the National Museum of Photography, Film and Television, Bradford.

Julia Margaret Cameron (1815-79) is one of the most important figures in the history of photography. Given a camera in 1863 at the age of 48 by her daughter and son-in-law, she embraced photography with a passion bordering on obsession and, in little more than a decade, produced hundreds of searching portraits of the most eminent figures of the Victorian age and equally enigmatic portraits of her servants and friends. Her remarkable photographs are recognised today as being decades ahead of their time.

This is the first major exhibition to draw on the finest of Cameron's prints, from museums and private collections throughout Europe and the United States. It will bring together 120 of her most important images in a unique exhibition that has been organised by the National Portrait Gallery in collaboration with the National Museum of Photography, Film & Television, Bradford. The exhibition also tours to The J. Paul Getty Museum, Los Angeles.

Cameron's portraits of the great figures of Victorian art, literature, and science have become the definitive representations of them today. Living at Dimbola Lodge in Freshwater Bay on the Isle of Wight (where Queen Victoria had a summer home, Osborne House), Cameron converted her greenhouse and coal shed into a studio and darkroom, where she photographed Alfred, Lord Tennyson and G.F. Watts, who lived locally, as well as such visitors as Robert Browning, Charles Darwin and Sir Henry Taylor . Friends, family, servants, and even passers-by were conscripted as models for her portraits and fancy-dress tableaux.

Highlights of the exhibition include portraits of those mentioned above, as well as others - such as Thomas Carlyle (one of the National Portrait Gallery's first Trustees), Sir John Herschel (the scientist who coined the very word 'photography') and Pre-Raphaelite artist William Holman Hunt . Also on show are Cameron's stunning portraits of Victorian beauties - Julia Jackson (Virginia Woolf's mother), Alice Liddell (Lewis Carroll's muse), Marie Spartali and the 16-year-old Ellen Terry (later the greatest actress of her generation). There are elaborate costume-pieces of 'Madonnas, May Queens and Virgins', as well as children with 'solemn eyes and waving locks'. Among the contextual material are personal albums presented by the photographer to her friends and family.

Cameron's images were strongly influenced by the Pre-Raphaelite painters - Millais, Rossetti, Holman Hunt and Watts - and nowhere more so than in her costume pieces illustrating religious, literary, poetic and mythological themes, for example her Arthurian photographs taken to illustrate Tennyson's Idylls of the King (1874). Cameron's photographs have been called "the world's first close-ups". They are notable for the intimacy and psychological intensity achieved by the use of extreme close-up, suppression of detail, soft focus and dramatic lighting. Photography was young when she began her career and her success helped increase its status as a legitimate art form.

As a woman amateur, Cameron found it hard to find professional recognition in the many photographic and artistic societies that existed at the time. Although she was elected a member of the Photographic Society in London within a year of receiving her first camera, their journal - along with the rest of the photographic press - was quick to criticise her deliberately unsharp pictures: 'As one of the special charms of photography consists in the completeness, detail and finish, we can scarcely commend works in which the aim appears to have been to avoid these qualities'. But - more importantly to Cameron - the art world consistently supported her work more than that of any of her contemporaries.

Julia Margaret Pattle was born in Calcutta in 1815. After being educated in Europe she returned to India and, in 1838, married Charles Hay Cameron, a prominent figure in the English administration of India. On Charles' retirement in 1848 they moved to Kensington in London where Julia moved in artistic circles, before establishing their home on the Isle of Wight. In 1875, at the peak of her fame as a photographer, the Camerons went to live in Sri Lanka (then called Ceylon), where Charles owned a number of coffee plantations. She took relatively few photographs there in the four years before she died - virtually all are shown together in this exhibition for the first time ever. Her work was largely forgotten, until first P. H. Emerson, then Alfred Stieglitz and Roger Fry, re-discovered it in the early 20th century.

Publication
The exhibition is accompanied by an illustrated biography of Julia Margaret Cameron by Colin Ford, published by the National Portrait Gallery (price £40 hardback). The exhibition also coincides with the publication by of the first complete catalogue raisonné of Julia Margaret Cameron's work, by Julian Cox, and Colin Ford, with contributions from Philippa Wright and Joanne Lukitsh. (Thames and Hudson, 576pp, price £95, hardback)