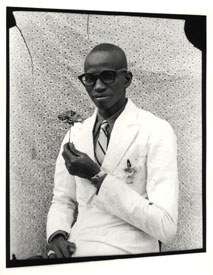 You Look Beautiful Like That presents the work of Seydou Keïta (1921-2001) and Malick Sidibé (born c.1935), commercial photographers working in Bamako, Mali, from the 1940s to the 1970s. Since the early 1990s, they have received international recognition for their remarkable and engaging portraits of members of the local community.

Keïta and Sidibé's portraits were commissioned on a small scale, by the sitters, for distribution to their friends and family. They were originally produced in a postcard format for a private audience and often commissioned to mark special family occasions. The names and professions of many of the sitters have been lost but their identities, aspirations, and fantasies are communicated through their portraits, by their clothing, props and poses. They wear their best clothes or the latest fashions and hold their most treasured possessions - radios, motorbikes, animals, sewing machines - as they pose for the camera. The portraits reveal the clients' status within the community and reflect their desire to be seen as cosmopolitan.

The title of this exhibition comes from a favourite expression in Bambara, the language widely spoken in Mali, "i ka nyè tan" which means "you look beautiful like that" and reflects the photographer's goal of making their subjects look good. The exhibition features 72 black-and-white images including 14 postcard sized prints showing the original format of the commissioned portraits. Keïta and Sidibé's work is also presented in the context of early European and African portrait conventions in West Africa.

From its introduction into Africa, the camera had largely been used by Europeans and was instrumental in affirming the stereotypes through which the West interpreted Africa and its people - typical subjects were missionaries saving "savages", or anthropological and ethnographic studies. In contrast, Keïta and Sidibé collaborated with their sitters to produce images that had significance within their own society.

Commercial portrait photography first came to Mali in the 1930s. Keïta was one of the first African photographers to work in Bamako, beginning in the 1940s. Although clearly connected to long-established conventions of studio portraiture, his portraits have a unique expressive style. Sidibé adapted that style for a new generation. As portrait conventions and societal roles became more flexible in the 1960s and 1970s, the subjects of his photographs took a more active, often theatrical, role in constructing their portraits.

Keïta and Sidibé were working in Bamako in the decades before and after Mali's independence from France in 1960. They produced tens of thousands of portraits for members of their communities. The resulting body of work forms a remarkable social document and a unique record of a community undergoing considerable social change.

Seydou Keïta spent the early years of his life apprenticing with his father as a furniture-maker. It was in the 1930s, as Bamako grew into a modern city, that he began to experiment with photography. In 1948 Keïta opened a studio in a lively part of the city. His clients were members of Bamako's elite class including office clerks, shopkeepers, employees of the colonial government, and politicians. In 1962 Keïta became the official photographer of Mali's new socialist government, documenting events such as official visits and meetings of heads of state. Although he continued his portrait work, a year or two later the administration pressured him to close his commercial studio. He retired from his official position in 1977.

Malick Sidibé studied jewellery making in Bamako in 1952. After graduating in 1955, he was hired by French photographer Gérard Guillat to decorate his shop. Guillat later took him on as an apprentice. Sidibé bought his first camera in 1956 and the following year began photographing private events for clients in addition to making portraits. He opened his own studio in 1962. While portraits were his primary business, Sidibé continued to do reportage until the late 1970s. He has also been repairing cameras since 1957 and every inch of his studio is taken up with cameras, parts, and thousands of negatives. Like other photographers of his generation, Sidibé found his practice undermined by the emergence of colour photography in the 1980s. His studio, however, continues to be an important neighbourhood meeting place.

Publication
A 116 page fully-illustrated catalogue published by the Harvard University Art Museums and distributed by Yale University Press accompanies the exhibition. It includes excerpts from recent interviews with the artists and an essay, by Michelle Lamunière, placing their work in the context of the history of portrait photography in West Africa. Price £16.95 (paperback).