There were four prizewinners and fifty others selected for exhibition. 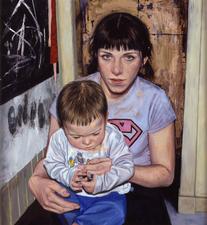 The Miracle
by Stephen Shankland
oil on board
© The Artist

Stephen Shankland (b.1971) is a Scottish artist and graphic designer living and working in Aberdeenshire. He studied at Grays School of Art and has exhibited widely, including in the BP Portrait Award 1999. The Miracle is a portrait of Stephen's wife Kelly and son Connor, who was born prematurely in January 2003. 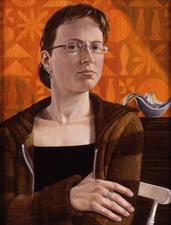 Louise Tiplady
by Paul Harris
oil on canvas
© The Artist

Paul Harris (b.1967) is an artist and stonemason based in Herefordshire. He studied Fine Art at Camberwell School of Art before taking an Advanced Diploma in architectural masonry and carving at Weymouth College. After working as a stonemason on Hereford Cathedral he set up his own stone carving and masonry business and his portrait is of his business partner Louise Tiplady. Paul returned to painting a year ago and this was the first work which he completed. 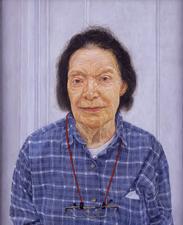 Fergus Mayhew (b.1963) studied at the Royal Academy and is now a full-time father living in Devon. He has been a regular exhibitor in the BP Portrait Award in recent years and this year has been short-listed for his portrait of his mother, Bunty. 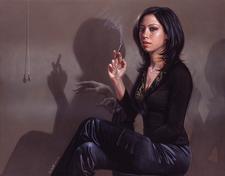 Self-portrait
by Sara Shamma
oil on canvas
© The Artist

Sara Shamma (b.1975) is a Syrian artist living and working in Damascus. She is a graduate of the Adham Ismail fine arts institute and Damascus University where she studied fine art. She has exhibited and won awards in Syria as well as contributing to group shows in Europe, Canada and the Middle East. Her short-listed portrait is one of an ongoing series of self-portraits.