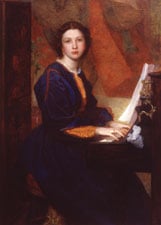 Timed to coincide with the centenary of his death, this major exhibition is both the first to focus on portraits painted by the great Victorian artist George Frederic Watts (1817-1904) and the largest exhibition of his work in 50 years. Watts was a central personality of the Victorian era: a friend of Tennyson, Ruskin, the Pre-Raphaelite artists and pioneer photographer Julia Margaret Cameron. He married Ellen Terry who became the greatest English actress of the period, though the marriage was short-lived. Precociously gifted, self-taught and much revered at his death, G.F. Watts was one of the most significant figures in nineteenth-century British art.

The exhibition brings together over 50 of Watts's finest portraits, the majority of which are being lent from private collections. It focuses on Watts's private commissions to paint the artistic and social elite of mid-Victorian London. It provides a once in a lifetime opportunity to see little known and strikingly beautiful works, many of which will be surprising even to specialists in Victorian art, literature and history. This exhibition forms part of a series of centenary exhibitions and events taking place throughout 2004 at venues including Tate Britain, the Royal Academy of Arts, the Watts Gallery and Leighton House Museum.

Lady Margaret Beaumont and her Daughter
by G.F. Watts, c.1860-2
The Viscount Allendale

As a portraitist Watts had an enormous output - over 300 images in oils and countless drawings, ranging in date from the 1830s to 1904. Best remembered today for his large-scale symbolist paintings, such as Hope, and for his Hall of Fame series of portraits of his eminent contemporaries, he also produced some of the most glamorous full-length portraits of women of the Victorian era. In the grand manner of Reynolds and Gainsborough, but rich in colour and detail, these full-length portraits have never been seen as a group until now.

Watts established a solid reputation in intellectual and aristocratic circles. He became great friends with Lord and Lady Holland whilst he was living in Italy in the 1840s. Several portraits of Lady Mary Augusta Holland, both drawings and oil paintings, reveal more about the nature of the close relationship she and Watts shared in Italy. Lord Holland was an important patron and friend to Watts. In the grounds of Lord Holland's Kensington home, Little Holland House was later established as the salon of the Victorian period, a meeting place for the most famous politicians, writers and artists of the day. 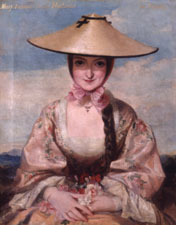 Little Holland House was leased by Henry Thoby Prinsep. His wife Sara was one of the seven remarkable Pattle sisters who included photographer Julia Margaret Cameron and, most importantly for Watts, the beautiful Virginia. Watts adored Virginia as an ideal and she can be seen as his muse, inspiring him in the years around 1850. Later Lady Somers, she is represented in the exhibition by a grand full-length portrait from Eastnor Castle.

Watts eventually moved to Little Holland House as a permanent house-guest, living there for 25 years. On Sunday afternoons Sara Prinsep's salon attracted artists including the Pre-Raphaelites and Burne-Jones, writers such as Carlyle, Ruskin, Browning and Tennyson, the eminent astronomer Sir John Hershel and politicians such as Gladstone. They came to see Watts, the "Signor" as they called him, and to enjoy the bohemian atmosphere in comparatively rural Kensington.

Watts's first, disastrous marriage began at Little Holland House. Here he met two attractive sisters, Kate and Ellen Terry from a well-known theatrical family. In 1864 Watts married the young Ellen, when she was barely 17 and he was 47. The marriage, brief and unhappy, was over within a year. However, in that time Watts completed several stunning portraits of his young wife; three of these are included in the exhibition. 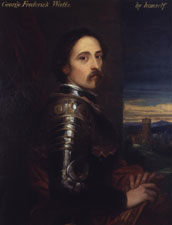 Born in London into a musical but impoverished family, Watts sympathised with the dreadful living conditions of the urban poor in the late 1840s. His idealistic outlook encouraged him to use his art as a vehicle for his moral purpose. In the same spirit, he readily gave his works to museums in Britain and abroad where they could be viewed by a wide public. From the 1850s, Watts painted the Hall of Fame portraits of eminent Victorians including Carlyle, Tennyson, Browning and Rossetti. Produced entirely at his own expense, Watts bequeathed the series to the National Portrait Gallery in 1895 and many are now on display at St Martin's Place and at the Gallery's regional partner, Bodelwyddan Castle, in North Wales.

In the early 1870s, when the lease on Little Holland House expired, Watts moved temporarily to the Isle of Wight - already a popular destination with the Victorian elite including Queen Victoria, Tennyson and Julia Margaret Cameron.

Some of the most beautiful of Watts's paintings are portraits of his personal friends. These include several works showing the Pattle sisters; Mrs Nassau Senior; a double portrait of Ellen and Kate Terry known as The Sisters; and Violet Manners, later the Duchess of Rutland, an artist and close friend of Watts. Other sitters include Blanche, Lady Lindsay, artist, musician, and co-founder of the Grosvenor Gallery; Lillie Langtry, professional beauty and woman about town; and artist Dorothy Tennant.

The exhibition is curated by Barbara Bryant, art historian and author, specialising in the work of G.F. Watts. She was a contributor to to The Age of Rossetti, Burne-Jones and Watts (Tate, 1997) and is author of the forthcoming Oxford Dictionary of National Biography's entry on Watts, as well as other articles and essays.