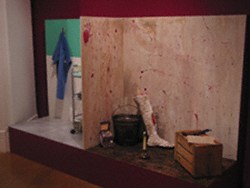 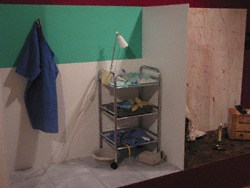 Stephanie's installation represents a modern day nurse's office as compared to Florence Nightingale's working environment in the Crimean War. The sterile contemporary interior is in stark contrast to the primitive conditions which Nightingale fought so hard to improve, represented in this piece by a severed leg and blood stained walls.

Florence Nightingale greatly reformed hospital nursing during the nineteenth century. She trained as a sick nurse in Germany. She was invited to take nurses out to tend the wounded in the 1854 Crimean War, where her sanitary reforms reduced cases of disease. One of her greatest achievements was to raise nursing to the level of a respectable profession for women in Britain. She established a training school at St Thomas' Hospital, London.