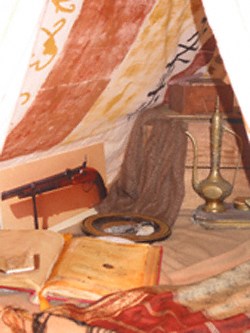 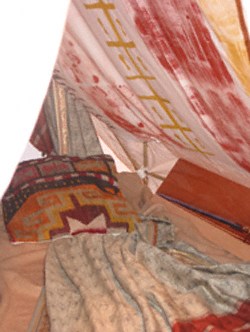 Scott's piece makes reference to the story behind Burton's scar, which is visible in the original portrait. He has created the tent Burton used, when he was stabbed by a spear in Somalia. The interior of the tent, based on Burton's Moroccan room in his house at Trieste, contains the spear, alongside his personal effects, collected on his explorations around the world. 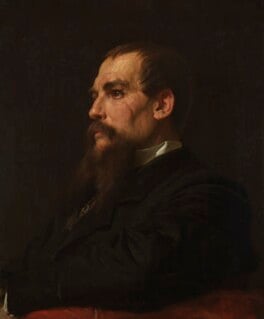 Sir Richard Burton the explorer, translator and scholar was attracted to all things exotic. During his lifetime he travelled far and wide. In 1853 he made a pilgrimage to the holy city of Mecca in disguise. With fellow explorer John Hanning Speke, he was the first European to discover Lake Tanganyika in Africa. Burton joined the British Foreign Office and spent most of the rest of his life in consular posts from which he continued to travel. He and his wife Isabel are buried at Mortlake, west London in a mausoleum carved to look like an Arabian tent.