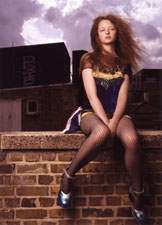 The second Schweppes Photographic Portrait Prize has been won by German photographer Jens Lucking for Tokyo, a striking portrait of three Japanese school-girls. The £15,000 award was presented at the National Portrait Gallery, London, Monday 15 November.

Sandy Nairne, Director of the National Portrait Gallery, said:
"Jens Lucking's portrait of three Tokyo school-girls was selected from the nearly 8,000 photographs submitted. It is a strong image, with a striking composition - a very deserving winner."

Charlotte Oades, President, Coca-Cola Great Britain said:
"The amazing breadth and high standard of entries this year, from both amateur and professional photographers, has made this a very exciting photographic prize to be associated with. The Schweppes Photographic Portrait Prize represents a huge enthusiasm for portrait photography. This is all about people - people who are prepared to be portrayed but also it's about the outstanding skills of their photographers."

This is the second year of the Schweppes Prize, which has already firmly established itself as the leading showcase for new talent in portrait photography. The Schweppes Photographic Portrait Prize 2004 has received entries from 2,661 photographers, more than double the 1,212 entrants who applied last year. Judges have selected 61 portraits for the exhibition from the 7,906 submitted images. 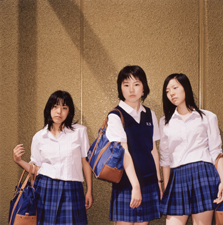 Jens Lucking for Tokyo
Jens Lucking (b.1972) hasn't left the house without his camera for the past 22 years. After training in Germany he moved to London in 1996 and now spends his time taking photographs for advertising clients, Getty Images and personal projects. Jens met the three sitters in this portrait - Erina, Reina and Zyuria - through a mutual friend whilst working on a project in Japan in June this year.

He says of the portrait "The photograph is set up but I didn't want it to appear too posed or fashion-like. Part of my style is to push naturalism a bit, but I still like things to look believable and realistic. I'd never met these women before, but I hope I've captured something of their characters. They all come across as strong females so that's how I show them - self-confident, almost arrogant. I was desperate to avoid that cute, looking down, Japanese school-girl thing, and I think this portrait is the antithesis of that". 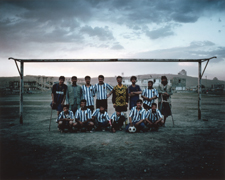 James Reeve for Landmine Amputee Team
British photographer James Reeve (b.1974) completed an A-level in photography before working as a photographer's assistant in fashion and advertising. As a freelance photojournalist since 1999 he has travelled to over 35 countries shooting reportage features and portraits both for editorial commissions and personal projects. This portrait was shot in May in Kabul, Afghanistan as part of a project focussing on activities that were previously banned or curtailed by the Taliban regime. 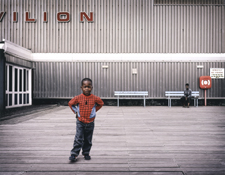 Angus Fraser for Cassius and Julia
British photographer Angus Fraser (b.1975) took a degree at Reading College of Art, and then became a freelance assistant for the next 5 years. He now works as a freelance commercial photographer based in London. The sitting for this portrait took place at the Pavilion Sports Centre in Herne Bay, Kent. Julia is an old friend of the photographer and Cassius is her son. 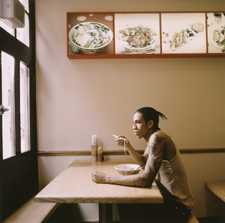 Henrik Knudsen for Jonathan I
Henrik Knudsen (b.1967) studied photography in his native Denmark before moving to London in 1992 to work as a photographer's assistant. Since 1994 he has been freelance, working on advertising campaigns as well as editorial and personal projects. He has won various awards, including D&AD, Clio, Campaign and The Association of Photographers Awards. 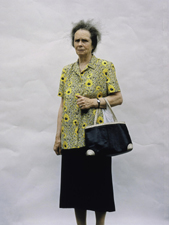 Paul Plews for Untitled
Plews says "She refused to tell me her name and I know virtually nothing about her, which I quite like in a way. It brings a degree of ambiguity to the picture. Rather than telling people everything about her it's nice to let them make up their own minds".

Plews graduated last year from Blackpool and the Fylde College and this image is from his degree show portfolio. He has recently moved to London and is working as assistant to photographer Bob Carlos Clarke. Proud of his working class upbringing Plews incorporates the industrial surroundings of his Northumberland childhood into his own work, and continues to focus on themes of industrial decline. Untitled was photographed with a RB 6 x 7.