ON TUESDAY 13 JUNE the winner of the BP Portrait Award 2006 was announced by singer and art collector Bryan Ferry at the National Portrait Gallery. In the 17th year of its support, BP also announced it was extending its sponsorship of the competition from 2007 until 2011.

Kitty
by Andrew Tift
© the artist

Andrew Tift (b.1968) who lives in the West Midlands graduated with a first-class degree and a Master of Arts degree from the University of Central England. His winning portrait is a triptych of Lucian Freud's first wife, Kitty Garman, whom Freud painted many times, perhaps most famously in "Girl with White Dog" (1950-51). She used to live just outside Andrew's home town of Walsall, whose New Art Gallery houses her family's works of art, the Garman Ryan Collection. Andrew had been working on portraits of Kitty for a small show at the Gallery and this triptych is part of that series. Its style was inspired by John Freeman's 1960s Face To Face TV interviews.

Andrew has exhibited in the BP Portrait Award 10 times and has been short-listed for first prize on four previous occasions. He won the BP Travel Award in 1995 with Sayonara Pet which focused on the cradle-to-grave work ethic in the Japanese car manufacturing industry. His previous sitters include Tony Benn and Neil and Glenys Kinnock. Andrew Tift says:  'I work in a highly detailed, intensely realistic manner and aim for an absolutely pure and objective likeness. I seek to convey people in the most understanding, intimate and sympathetic way that I can.' 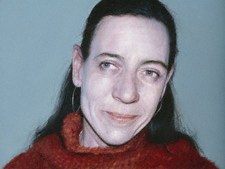 Rafael Rodriguez (b.1977) lives and works in Mexico. He studied architecture and fine arts. He has participated in group and solo exhibitions in public and private galleries in Mexico internationally since 1999. His exhibition 'Ansikte' based on an itinerary around Mexico City, Queretaro and Monterrey toured Mexico's national museums. In 2004 the Swedish region of Vastra made him artist in residence in the ateliers at the Watercolour Museum in Tjorn, Sweden. 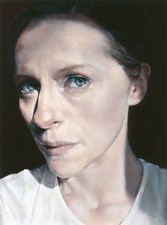 Self-Portrait
by Angela Reilly
© the artist

Angela Reilly (b.1966) lives and works in Glasgow. She studied fine art at Duncan of Jordanstone College of Art and Design in the University of Dundee from 1984-1987. She exhibits frequently in both Edinburgh and London and at the Royal Society of Art and Royal Glasgow Institute where she won the NS Macfarlane award in 2004.