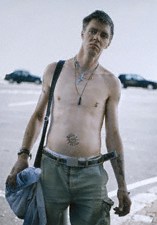 Joe (from the series 'Pavement')
by Richard Boll
© the artist

An admission fee of £1 is being charged to support the running of the Photographic Portrait Prize while the Gallery seeks a new sponsor for the exhibition.

Including The Deloitte Commission

The fourth annual Photographic Portrait Prize has been won by Richard Boll, 29, for 'Joe' . His first-prize winning photograph was taken outside his flat on Brighton's seafront and is the result of a four-minute chance meeting with Joe, a total stranger walking past, who initially did not want to be photographed. After eventually agreeing to the photograph, Joe left Richard Boll and both went their separate ways. But once he had heard the portrait had been shortlisted for the Photographic Portrait Prize, Boll set about trying to track 'Joe' down. Having called at local pubs with a copy of the picture to ask if anyone had seen him, he eventually found him outside a café.

The following artists have also been commended in the Photographic Portrait Prize and receive the following prizes:

£1500 Second Prize: Anna Bauer for 'Jungs, Livingroom' (from the series Them, growing)

£500 Fourth Prize: Kyoko Hamada for 'Emily and Her Grandmother' (from the series Hometown)

The winner of The Deloitte Commission , for the best portrait taken by a photographer aged 25 or under, is Erin Kornfeld for Prudence and Julie. She receives £5,000 as well as the opportunity to undertake a portrait commission for Deloitte and the National Portrait Gallery.