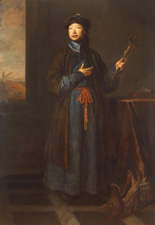 Supported by the Government of Canada

From the seventeenth century onwards, non-Europeans from distant lands visited or were brought to London. Here they caused great excitement, interest and curiosity. Their experiences are both engaging and, on occasion, shocking. The exhibition examines the complexities and ambiguities of their time in London through the images and objects that were produced in the period.

A painting of Michael Alphonsus Shen Fu-Tsung by the famous British artist, Sir Godfrey Kneller introduces the exhibition. This is a vivid portrait of an individual who moved 'between worlds'.

Use the links below to view the nine diverse stories of men and women who were drawn from regions with which Britain had a colonial relationship: North America, the South Pacific, Africa and India. Use the map on associated with any of the portraits to find out more about each traveller's tale.