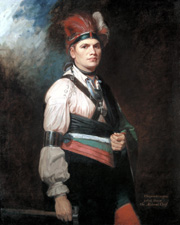 Joseph Brant (1742-1807), or Thayendanegea to use his Mohawk name, was perhaps the most accomplished and well-received American Indian visitor to England during the eighteenth century. He visited Britain twice. In 1775-6 he came to reaffirm Iroquois alliances with the English at the time of the American Revolution. In 1785-6 he returned to gain assurances from colonial administrators and the British Crown that their promises of protection would not be forgotten once their campaigns in America had been concluded.

Assessments of his achievements were and still are mixed. In Britain he was thought of as the loyal ally and friend who could deliver tribal support for George III in his war against the American rebels. In America he was known as 'the monster Brant', said to be responsible for a massacre in the Wyoming Valley, in 1779. For some of the present day Iroquois, both in Canada and the United States, he is still seen as the great betrayer who sold off tribal lands to speculators for his own personal profit. For others, he is regarded as a responsible leader and representative of his people, who safeguarded their interests through a period of cultural change. The portraits of Brant reinforce the image he wished to project to his British allies.